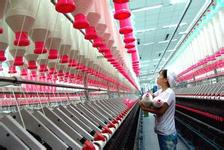 In 2012, regardless of exports or domestic sales, the benefits of the textile industry have declined. Relevant data show that since 2012, China's textile and apparel exports have continued to slump, and the number of exports has continued to decline for months. According to the statistics of the General Administration of Customs, from January to October 2012, textiles and garments exported a total of 209.86 billion U.S. dollars, an increase of 2% year-on-year; of which, textile exports accounted for 79.1 billion U.S. dollars, an increase of 1% year-on-year; apparel exports stood at 130.76 billion U.S. dollars, an increase of 2.6% year-on-year; The growth rate slowed sharply from the same period of last year. Since 2012, the proportion of China's domestic textile output value has continued to increase. Although sales growth has shown signs of slowing down, from January to October 2012, the year-on-year growth rate of apparel retail sales and retail sales was 14.2% and 2.4%, respectively. The 20.4% and 4.9% declines in 2011 were significant, but the domestic demand market will continue to be the primary support for the textile industry.

2013 may be the year in which the bottom line of the industry benefits: The four factors that contribute to deceleration in the industry's performance are difficult to change, namely, macroeconomic slowdown, over-expansion of enterprises, suppression of demand caused by high costs, and homogenized operations. Relatively speaking, due to the early start of the integration of export manufacturing industries and the recovery of overseas demand, the recovery may be slightly earlier than that of retail sales; export manufacturing companies may bottom out slowly: the demand brought by the US economic recovery slowly picks up. As well as the reduction in production capacity after two years of deep industrial integration, in addition, although domestic consumption may still be unsatisfactory, the decline rate will undoubtedly be lower than 12 years. The benefits of these export manufacturing enterprises have improved, and it is expected that textile and apparel exports will continue for 13 years. The 12 years are similar, with little fluctuation.

With the improvement of the income level of urban and rural residents in China, domestic demand consumption is undergoing continuous expansion and the macroeconomic fundamentals of the upgrade phase have not fundamentally changed. Adhering to the principle of expanding domestic demand is still the basic starting point of Chinaâ€™s macroeconomic regulation and control policies in 2013. Therefore, the domestic retail For the whole year, the nominal growth rate of 15%-20% can be achieved. However, it is worth noting that the pressure of factor cost is increasing. In recent years, the prices of textile raw materials have fluctuated sharply, and the prices of labor, fuel, and other factors of production have continued to rise. As a result, the companyâ€™s cost pressures have continued to increase, and the tight supply and demand structure of resources and the elimination of currency liquidity problems will take time. This will determine the cost pressure. General will become the normal operation in the industry.

Relying on technological progress, improving production and management efficiency to resolve cost pressures, and improving the level of business decision-making to avoid market risks have become an important task for companies. Therefore, it is suggested that enterprises should pay attention to the macroeconomic situation to judge the guiding role of business decision-making, pay attention to the development and changes of the macro-economy, grasp the orientation and trends of domestic macro-control policies, and timely adjust the business management strategies. Correctly understand the inevitability, long-term and arduous nature of the task of transformation and upgrading of the textile industry, change their thinking, concentrate on strengthening their own construction, and improve their ability to withstand and resolve risks.